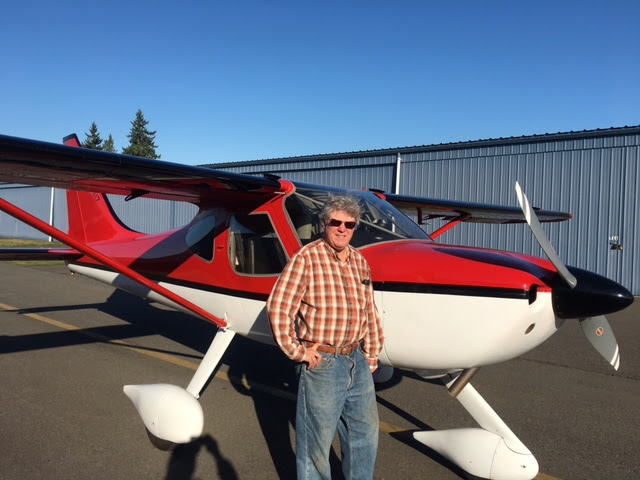 The first one that gets there with money gets the airplane.  I flew commercial to Seattle on Friday.  By Saturday noon, I owned a Sportsman.   Now I need to fly VFR alone cross country to Connecticut.   I am a 926 hour private pilot flying a 172 and an Archer with some experimental years ago.  I’ve never flown a Sportsman, have no experience with a constant speed prop, have not flown coast to coast before and certainly have never flown over mountains like the Rockies and Cascades.

The insurance company required transition training.  With November weather patterns, I could get stuck for weeks if I didn’t depart the Northwest quickly.  Given little more than a day’s notice, Alan rearranged his schedule to accommodate me.   He crammed 5 hours of intensive training into me over two days.  Landings, manifold pressure, rpm, slow flight, canyon turns, stalls, more landings.

I would have gotten some transition training even if the insurance company hadn’t required it.  If you are used to Skyhawks and Archers, the Sportsman is different.  There is more going on during take off and it comes up fast – get the flaps up before max flap speed is reached; reduce manifold pressure to climb, reset the rpm.   Landings are different too.  The Cessna style approach of reduce power and lose airspeed doesn’t work.  The Sportsman needs to be pointed down.

For this trip Alan said I needed to be prepared to divert and land safely at all types of airports.  (He was right on that.)  We did 22 landings one day into nine airports.  To prepare for mountain flying, we flew through passes to backcountry airstrips.  I asked if a particular strip was one way due to the mountain off the end. “No, we consider this one a two way.”, he said.

We also spent time on the ground discussing alternate routes across the mountains; tips on using Foreflight which I had just purchased, power settings at high altitudes and the like.  This proved invaluable.

The cross country flight took 22 hours of flying over 10 days due to weather delays.  Many things practiced in training were applied.  I made it safely in large part due to transition with Alan Negrin.

Flew commercial to Seattle, WA. Picked up the plane on Whidbey, Island north of Seattle. Got a check out from @AlanNegrin (highly recommend) and am now flying it home to Connecticut. What an adventure! My first flight across the Cascades and Rocky mountain ranges. Spectacular. Plane is performing well. Saw 170 kts ground speed. Sure, there was a tail wind but still it was a shock. Delayed 2 days in Helena, MT by weather. Stuck in Bozeman, MT- snow! MVFR across the Black Hills of South Dakota. Finally had a couple of good runs. Am now in Indiana at the former Chanute AFB.

This was Jack Jenkins’ plane. 180 hp. constant speed prop, steam gauges, fully painted. I like the Sportsman a lot. It handles well slow and is reasonably fast. I appreciate the big cargo door every time I stick my head in to look for something.